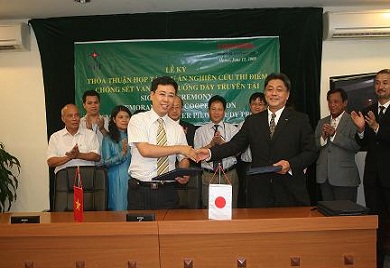 On June 12, the National Power Transmission Company (NPT) signed the agreement on co-researching on the project of lightning protection on 220 kV line with Toshiba Transmission and Distribution Company of Japan (Toshiba).

In the signing ceremony, Munehiko Tsuchiya, the Deputy Director and Deputy Permanent Chairman of the Management Board of Toshiba Transmission and Distribution Company, said that: “The lightning protection technology on the transmission line has been investigated, applied and transferred to other power companies in Japan and some Southeast Asian countries by Toshiba. In Vietnam, the research on the area with the high risk of lightning has been carried out by Toshiba and The Electricity of Vietnam since 2007 and has seen certain results. Based on the existing statistics, Toshiba accompanied by NPT and Power Transmission Company No.1 have signed the agreement on cooperating in researching the project on lightning protection on 220 kV line".

According to Vu Huu Hoa, the Chairman of Management Board, Vietnam is one of the area in which the lightning density is quite high compared to other countries in the region and the world. This has an effect on the ability to stable and safe power supply, especially when the transmission network is considered important in the power network of Vietnam. Therefore, it is necessary to investigate the models for the lightning protection technology that fits the condition of Vietnam.

With this project, the scope of experiment is the 220 kV from Uong Bi to Trang Bach which is 18 km long. Toshiba commits to support with equipment and transfer the installation technology, the methods to calculate the lightning density and the application of the technology. In addition, Dr. Masaru Ishii, Professor of Tokyo University and some other scientists of Hanoi Technology University will take part in the project.